The Council Nation of Malakarna is a small nation which was originally several small tribes that grouped together under one flag. Based of the Flag of Ireland the Council Nation of Malakarna is a peaceful nation that is relatively secluded being found in the Northern Tundras of Canada. Currently it has 2 recognized cities, its largest, Hyperion & the religious Capital, Peropolis. It also has several villages & towns that are showing signs of potentially being recognized as cities.

Hyperion is the Urban Hub of Malakarna and the Capital of the Country. Prior to the combination of the territories it was the main city of the region known as Malkare. Its ethics are based around knowledge and growth and displays this with having the largest University in the Country. It was agreed to be the Capital as it was situated in the direct heart of the country.

Peropollis is considered by most to be the Religious Capital of the Country. Prior to the combination of the territories it was the main city of the region known as Kiani. It is known for its deep unquenchable thirst for knowledge about the history of the Malakarnian People and their religious reituals. It is home to the infamous Stone Pantheon of which many prophets have gone to for spiritual guidance and enlightenment. It was recognized as a world-wide city on Dec. 29 2014 and was the second city in Malakarna to be recognized.

(Note: In Politics & War these places do not exist in Malakarna although may be added later)

The entire Council Nation of Malakarna is comprised of many different cultures that were formed prior to their joining of arms. The most common trait between all Regions is the exercise of peace and tranquility, this was one of the first agreements created upon the creation of the Council Nation. As it stands there is little tolerance for crime across all regions.

The Malkare region specializes in knowledge and is the communications hub of the nation and primary host to international events as well as many major national events. The captial Hyperion, contains the largest University in the Nation and the education percentage (percentage of People who complete primary education) is 98% while the Secondary Education Percentage is 75%.

The Kiani region has a deep connection to the gods of the land and its capital, Peropolis is considered the Religious Capital of the Nation. Many prophets have made journeys to the capital and some have stated to have experienced divine intervention, approximately 4 years after the Council Nation was founded the Capital of this region suffered a sever thunderstorm that struck a lightning bolt down one of the main pillars of the Lead Temple in the Town. It is said that the Lightning Bolt was sent from the gods and helped the land around the town become fertile and rich with crops.

Yarona and Daraka are commonly known as the War-Torn Regions and were the main regions to suffer casualties from the pre-Malakarna periods. It is estimated that Yarona had lost 13% of its population at one stage while Daraka had lost a colossal 29% of its population. After the treaty of peace was formed Yarona began building powerful defences and many of its cities are surrounded by giant walls that protect the inner areas. Daraka on the other hand has found that it has gained considerably more wealth from national trading as it has been calculated that after the treaty of peace, Daraka's annual income was estimated to have quintupled (multiplied by 5).

Possibly the most secluded and lonesome of all the regions the Serusid Region is the Nation's port and is where a majority of the seafood to the cities, towns & villages come from. It is also the smallest and is the only nation not capable of international travel by air. 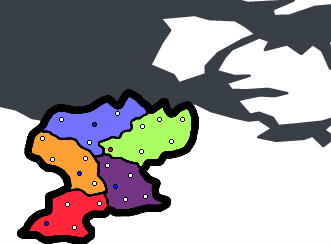 The Map to the right shows a map of Malakarna. The Capital, Hyperion is marked in Red, other Regional Capitals are marked in Blue. The Malkare Region is Green, Kiani Region is Orange, Yarona Region is Purple, Daraka is Red & Serusid is Blue.

Retrieved from "https://politicsandwar.fandom.com/wiki/The_Council_Nation_of_Malakarna?oldid=38917"
Community content is available under CC-BY-SA unless otherwise noted.