Sid Meier's Pirate War was a conflict that began on March 3, 2015 when Terminus Est launched attacks against Arrgh!. As TEst had been established longer then Arrgh, a large majority of their nations were at a much higher score range then Arrgh leaving only a small percentage of Arrgh nations in range to fight. Due to these tier differences, a majority of Arrgh nations were unable to take part in the conflict and it passed by with some not even realizing there was a war. The conflict lasted for a week before TEst declared peace. Both sides fought and peaced out with relatively little drama compared to most wars due to each alliance's war-like culture. 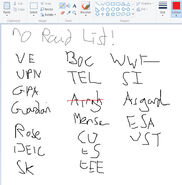