The Shinobi (忍び, Shinobi) are infantry units of Amenria in the Roleplay Universe. They excel in covert operations, such as espionage and assassinations.

Since the Sengoku Era, Shinobi are covert agents who are loyal to the death to their masters. Their loyalty, skills and mysteriousness made them perfect counter-spies for Japan against Western forces. Officially, they never had any connection to Japan's international or military affairs, yet they seem to be showing up in the battlefield.

When Japan became part of Amenria, so did the Shinobi. They began serving the Emperor and his forces, although documents linking them to the Empire's military is nearly impossible to find.

They do not have any uniforms so they couldn't be identified whilst doing their work. Most of them wear masks to hide their identity. They carry portable gliders with them, allowing them to cross obstacles. They also have smoke bombs to help them escape tough situations. Thanks to their training, they are able to seemingly appear out of nowhere and move at lightning speed.

There seems to be no terrain the Imperial shinobi cannot cross, and no fortress they cannot break into. Reports of shinobi infiltrations are growing by the week, causing, some would say, a bit of a panic among enemy forces unaccustomed to having to defend their forward bases against such an assault. The consequences of a Shinobi infiltration are varied and widespread, ranging from an entire base power grid and battlefield radar going offline, to outright theft of military production resources. Fortunately, no one besides Amenria's top military aides seems to know just how many Shinobi are in active duty today.

Shinobi are so quiet and stealthy, most people wouldn't notice one even if he walks right behind them. Their clothing also hides them from radar detection.

Years of training has made the shinobi masters of blade weapons, allowing them to kill all infantry with one strike, if they can get close enough to the target without getting spotted.

Shinobi training includes being taught how to commit feats no normal person can do, such as walking/running on water and vertical surfaces.

A female shinobi, also known as a kunoichi. 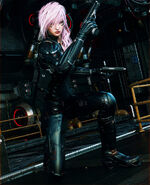 Add a photo to this gallery

Retrieved from "https://politicsandwar.fandom.com/wiki/Shinobi?oldid=32377"
Community content is available under CC-BY-SA unless otherwise noted.