Politics and War Wiki
Register
Don't have an account?
Sign In
Advertisement
in: Alliance Wars, History, Wars,
and 5 more

Oktoberfest, also known as the Covenant Power War, began on the 15th of October 2015, just before server update, when UPN, BoC, and DEIC declared war on tS, TEst, and SK. This was followed by a DoW on BoC by Mensa HQ in defense of Seven Kingdoms and the Syndicate. Peace has since been made, with The Syndicate and its allies coming on top.

Top 20 alliances before the war: 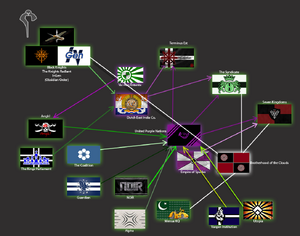 EoS then began attacking Utopia. BoC decided to declare peace, and did so on the 23rd. UPN and DEIC kept fighting until the 7th, when they too declared peace. The Covenant had dropped much in score, with tS and its allies claiming an obvious victory. Subsequently, UPN's protectorate bloc disbanded during the war, after its members were irritated about attacks against them.

For Brotherhood of the Clouds:

For Empire of Spades

Community content is available under CC-BY-SA unless otherwise noted.
Advertisement