Dolf Krieg is the incumbent leader of the Fascist state of Norsif that is located in the Nordic Asian area of the world of Orbit. It's furthermost north of most nations. Born in 2020 due to a global pandemic in Norsif that while they had zero immigration somehow it got into the nation. Nearly 4,000 died. His father ordered the executions and burning of the global pandemic of what was known as the Human Coronavirus 19. Men in full Hazmat gear executed the 4,000 people and burned their bodies to ash on his birth date. The Lord Admiral's reasoning is that there should be no risk to the people and the family that will lead it till the remaining royal family returns to their ancestral homeland.

Born July 31st, 2020; the young Dolf was born nine pounds, seven ounces. His mothers birth canal was not large enough due to him becoming stuck. An emergency C-Section commenced at her command. There was not enough time to administer her Anesthesia. She demanded he bisebe xtracted without it or epidurals. A two -inute procedure saved his life. She named him Dolf after her brother who fought in the Afghani Wars of 2015 and died heroically. Calling Mortar fire upon himself rather than be captured by Ian slamic terrorist.s

From a young age, he was heavily publicized in the media. Until his father demanded he go to a military Academy. Once there he was treated not only harshly but more so than his own cadets because of his father's rank. His own father demanded he suffer in the school so he can truly understand his small nations struggle for when he becomes its leader.

He excelled at this. He graduated early from his military academy at 15 instead of the year 17. He graduated as the Commanding officer of his class due to his excellent scores in both strategy and tactics.

Upon graduating from the Royal Norsif Military Academy he joined the Norsif Army and went to Airborne School in preparation of the Norsif Direwolves. Upon his graduation from the Airborne school, he was deployed to Chechnya where a minor rebel faction rose up after killing a Norsif Ambassador on business. During the Kosovo revolution of 2030 which he was deployed later at around 2038. The war ended after he went to Direwolve's training. After that, his military history ends except that he went from Lieutenant to a Field Marshall. People have demanded to know what their Commander has done to justify him to the world's assembly of nations which has denied his right to rule.

After his experiences in Afghanistan and Iran. Upon his inauguration, he demanded that all 250,000 Muslims in the nation be expelled by force. On the first day of Ramadan in 2045, all the Muslims by the end of a gun were forced out of the country. He then closed the borders and then declared any religion other then the Christian religion would be criminalized and made illegal. The country went from being an agnostic nation to a fundamentalist Christian nation overnight. While the nation was already mostly Christian there was no determined religion and under him; they saw a new era. While the Nation did not specify the religion of a certain denomination; a denomination of Christianity that has dominated the nation since at least 1402 was Templarric Christianity.

The nation saw for the first time in almost 60 years a national surplus even though his father built the military up to the point it consumed nearly 50% or more of the national budget. But under his leadership they went from a small island to claiming nearly 18,700 miles of land in the name of the Royal Family of Norsif.

Dolf Met his wife while he was in layover in Germany in 2037 at Frankfurt on his way home from the War in the East (Iran/Afghanistan/Iraq/Israeli/Jordanian War). She was on the same plane that would land in Denmark. As he sat in Row A of VIP in Seat 5. She was right next to him in seat 6. When she realized who she was her tone not only changed but she apologized not because of fear. But because she was informal with a Royal. She was only the daughter of a Dutches of Denmark. They kept in contact and in 2038 they became engaged and would then marry the following summer. She bore him two sons and 1 daughter to date. 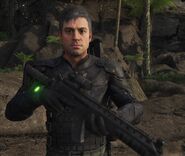 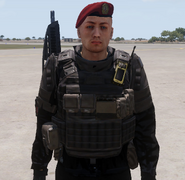 Dolf Krieg in the Norsif Airborne School.
Add a photo to this gallery
Retrieved from "https://politicsandwar.fandom.com/wiki/Norsif/Dolf_Krieg?oldid=54544"
Community content is available under CC-BY-SA unless otherwise noted.