The Norsif Direwolves are named after the biggest canines to believed to ever exist. named after the Canis dirus (Fearsome Dog). These units were created to instill fear amongst the nations that did not take the Norsif people seriously. They were first mentioned in 1942. But it is unknown when they actually began. Though it's believed they may have been a unit of soldiers since as early as 1502. Due to their language, the Guardians of the King were known as Direwolves.

It is truly unknown when this unit of not only Spies but of Special Forces even began. As they can be seen as potentially from 1502 to as late as 1942. It will be unknown until the nation of Norsif fails. However, what we do know of this shady organization is that they were commissioned by the Norsif chosen from the best soldiers of every branch and trained into special forces; then trained by intelligence operatives.It is unknown how long they trained or what it consisted of as every "news article" that was to expose this clandestine unit not only disappeared; but so did the families as if they never existed.

From we do know based on Norsif Military Gear Providers is that they do use a Synthweave of Titanium Thread, Kevlar, and polyester gear with a rubberized exterior. So if this unit is using this "experimental" armor it can be definitely said that the gear the Direwolves use is not only bullet-resistant but also bullet-resilient. We do know that the Wolves armor is of an extremely rare body armor that is LEVEL V. Indicating it can survive armor-piercing rounds, however, this cannot be verified as there has been no Direwolf to date that has been captured by the enemy or foreign agents.

We do know that if a Direwolf is in a peril situation he can set explosives placed in his gear to detonate. Once set there is no defusing them ore making them inert. This has allowed the Direwolves to operate with no captured agents and no way to truly verify whom and where they're from. It is believed their inner armor may have as much as 3kg of C4 Plastic Explosive. 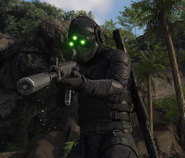 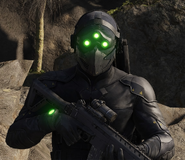 Direwolf Up Close
Add a photo to this gallery
Retrieved from "https://politicsandwar.fandom.com/wiki/Norsif/Direwolves?oldid=54551"
Community content is available under CC-BY-SA unless otherwise noted.